These words came from the mouth of none other than the President of the HEMP party, Michael Balderstone, in the main street of Nimbin in front of thousands of onlookers at this year’s Mardi Grass. At first glance you might be hit by a solid “WTF?!”, but think and look a little closer and you may just penetrate this mystery with relative ease. 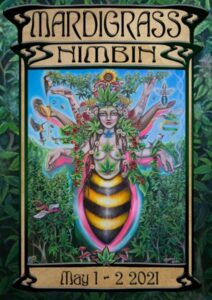 “But the bloody cops are free!” may be the first thought that comes to mind, however from the perspective of many campaigners and advocates in the Australian cannabis space, this is simply not true. The cops are not free to pursue rapists, thieves and murderers at all, particularly during Mardi Grass weekend in Nimbin. I certainly remember saying to others during the event that if I were a legitimate criminal I know when I would be planning my crimes to take place, and that’s because of the significant police presence the whole weekend, from Thursday until the following Monday.

Roadside Drug Testing facilities on every road in and out of town, with an average of 4 to 5 cops per setup, for 5 days… The monetary cost boggles the mind, yet what many were saying at the event echoed Michael’s sentiment – namely let the cops do the job they are supposed to be doing, which is serving and protecting the community. Some may argue that they were doing just that, but when you put 20 – 30 cops in a small and relatively insignificant town apart from one weekend a year, that is a hard argument to sustain.

Legalisation of cannabis in Australia would not only mean that many people being persecuted by the decaying edifice that is the ‘War on Drugs’ would no longer be subject to our ludicrous laws, but the cops would be free to do the job that more than likely most of them signed up for. Busting crooks, solving and preventing crimes against those who do no harm to others, and generally keeping things civil. Instead we have created a situation that alienates the police from the very communities they are meant to be protecting, and sees them preying on them instead, as the law requires that they do so.

Free the cops, change the law, and watch what happens to crime across our country. Bear witness to the massive difference made by community cooperation with police as opposed to what we have now. Harassment, discrimination and a distinct absence of justice and fairness. The only way to free the cops is to change the law. I’m with you on that one Michael.

By the way I spoke there too. Big thanks to the whole Mardi Grass crew and Disco Sista for her video expertise.

Free the cops from the laws that have sentenced them to carry out injustice on their brothers and sisters. Only then can they do the job they were meant to do.

Everything you ever wanted to know about foraging is here! The book that you didn’t even realise needed to be written has been written. As I say in … END_OF_DOCUMENT_TOKEN_TO_BE_REPLACED

These words came from the mouth of none other than the President of the HEMP party, Michael Balderstone, in the main street of Nimbin in front of … END_OF_DOCUMENT_TOKEN_TO_BE_REPLACED

Allow me to reintroduce the Multi Criterion Decision Analysis (MCDA) tool championed by Professor David Nutt back in 2011. Before I do though, did you … END_OF_DOCUMENT_TOKEN_TO_BE_REPLACED