We’ve all used the drug ethanol (alcohol) for years, so it can’t be that bad…can it? 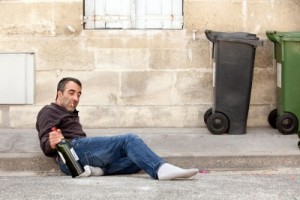 Well let’s investigate that for a moment shall we? Hands up if you’ve used alcohol before.

Pretty much all adults over the age of 18 in our great country have before at one time or another, 83% of all Australians in 2004 to give a better picture. Sorted. Now hands up if you have ever abused alcohol before.

(Responsible Choice puts hand up again, this time with a sheepish but mischievous grin).

OK, now let’s get a bit more provocative. Hands up if you used alcohol before you were of legal age, i.e. 18 years old.

(Responsible Choice puts hand straight up, but with a much more open smile whilst looking around the room at other hands, and chuckles knowingly)

Oh dear. Well let’s keep moving. Next, who has ever done any of the following while or after drinking:

– Made a fool of themselves

– Had a chronic hangover, possibly requiring absence from work

(Responsible Choice puts hand up and waves it around while cackling like an idiot).

Ahem. OK, well what about these next few:

– Engaged in unsafe or non-consensual sex

– Violently assaulted another or experienced violence of any form at the hands of another, including domestic abuse

– Been involved in an accident resulting in serious injury or death

(Responsible Choice looks around the room, knowing full well he has done at least one, but stays his hand and waits to see what everyone else does)

If you are still reading this then I thank you. I would wager that you are one of the millions of Australians who has experienced first-hand the negative social effects of consuming the drug ethanol, more commonly known as alcohol. It is not an easy thing to reflect upon things that happen in life that you wish you had never done, said, seen or experienced. Yet, despite having experienced any or all of the above effects related to alcohol, we continue to use it. Why?

“It is used for relaxation, socialisation and celebration. Alcohol also plays a significant role in the Australian economy, generating substantial employment, retail activity, export income and tax revenue. There is also evidence that alcohol can benefit the health of some individuals, if consumed at low levels, by contributing to the reduction of cardiovascular disease risk from middle-age onwards. Everyday, thousands of Australians benefit in some way from alcohol.

Alcohol also has great significance because it is a drug. It is a psychoactive substance that can promote relaxation and feelings of euphoria“.

In other words it makes it easier for you to chill out and enjoy yourself, which is a beautiful thing. However, unfortunately, beauty in terms of alcohol is only skin deep. Now I am not here to bad mouth alcohol. I drink on occasion and in the past often didn’t even need an occasion. This does not, and cannot, EVER, change the following facts.

Alcohol is a, if not THE, major contributor to 7 out of the 10 leading causes of death in Australia.

It warrants a re-read, so please go ahead. When I first read it I couldn’t believe it, because if these stats are true, WHAT THE HELL!? No one told me! At least not explicitly, breaking it down so I could understand that regular use will quite likely lead to cancer, heart disease, diabetes, mental disorders and more. I was gutted. But then upon reflection I realised how absolutely terrible I feel after I drink too much, and it all became a little bit clearer. A little.

Obviously the key is moderation, right? Right? But that is something I would like to think I have learned over time. Unfortunately I was not graced with the good sense to know when enough is enough when I was………18 years old. (Responsible Choice looks at the ground and tries to keep a poker face).

As Voltaire once said – “Use, do not abuse; neither abstinence nor excess ever renders man happy”.

Smart man that one.


What do you think?

Everything you ever wanted to know about foraging is here! The book that you didn’t even realise needed to be written has been written. As I say in … END_OF_DOCUMENT_TOKEN_TO_BE_REPLACED

These words came from the mouth of none other than the President of the HEMP party, Michael Balderstone, in the main street of Nimbin in front of … END_OF_DOCUMENT_TOKEN_TO_BE_REPLACED

Allow me to reintroduce the Multi Criterion Decision Analysis (MCDA) tool championed by Professor David Nutt back in 2011. Before I do though, did you … END_OF_DOCUMENT_TOKEN_TO_BE_REPLACED