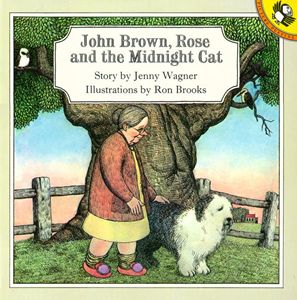 
One of my children’s favourite books so happens to be John Brown, Rose and the Midnight Cat by Jenny Wagner (Author) and Ron Brooks (illustrations).  Have a listen if you like.

Awwwwww, can you see why?

Now try and dig this. This story is actually not about cats and dogs disliking each other and not getting on.

It’s really much more profound. It’s about us as a society, the government, alcohol and cannabis! SURPRISE!! Of course this is only the case in my mind, but still……

Hear me out now:

Rose is actually us. Our husband is our WILL. By that I don’t mean the piece of paper that says who gets what when we die, I mean the desire of an individual, and the acts done when such decisions are put into effect. It died a long time ago, at least as far as political reform goes, particularly drug reform.

John Brown is the government. He stays with Rose and gives her what she wants because he loves her. He sits under the pear tree with her and looks after her in every way he can. We can take this to mean he helps her enjoy herself on a hot day in a way he can. The government helps us enjoy our hot days by ‘allowing’ or ‘giving’ us access to alcohol. It makes us happy right? In winter a few drinks by the fire is a stereotypical romantic image, one of relaxation and romance, perhaps not for Rose the old granny, but you get the drift. All under the watchful eye of the government, i.e. the Law!

Rose is thankful to JB for giving her this and watching out for her. She doesn’t know any different and is content. For a few decades.

Then Rose looks out the ‘window’. I would like to think that Responsible Choice is one of the windows in Rose’s ‘house’. It gives me a big head to do so anyway. She then sees something in the ‘garden’. Need I go into the garden reference? It is a little friendly cat that puts a smile on her face. She is interested but JB doesn’t want to even look at it. She sees that it is a potential comfort similar to JB’s comforts (alcohol), and asks him to first acknowledge its presence and then feed it, i.e. investigate its potential. He refuses to even admit to knowing of its existence, let alone feeding it. He goes out that night, instead, and outlines an arbitrary barrier he has created to keep the cat out, the cat of course being cannabis. Midnight Cat aka Cannabis Cat in fact. JB doesn’t want any change because HE is happy with the way things are.

Cannabis cat doesn’t reply to the aggressive and belligerent tone that JB is using because IT IS A NATURAL PHENOMENA, IT HAS NO VOICE.

John Brown continues to resist all of Rose’s requests to look into the Midnight Cat’s presence and movements in the garden, the ‘garden’ being the world and ‘movements’ being effects. Rose attempts to ‘feed’ the cat herself, but JB actively sabotages all of her attempts to.

Eventually the cat jumps onto the window sill, in full view of them both. This we can take to be referring to research done on cannabis that cannot be denied, such as how it has a synergistic effect on the body’s own Endocannabinoid System.

But what does John ‘The government’ Brown do? HE SAYS “NO!” when asked to let the Cannabis cat in.

Now here is the crucial lesson of this story. Rose then essentially states she is withdrawing from John Brown, AND THEN DOESN’T FEED HIM. Feeding in the case of people and the government can be taken to mean VOTES. That’s right. Votes. She denies him support by not voting for him. She takes a stand and says she is sick of how he is acting towards Cannabis Cat. Only then does he reconsider his completely illogical and senseless stance on the whole issue.

Then he lets the cat in, and as we all know, once the cat’s out of the bag, or garden, EVERYONE CAN BENEFIT FROM SHARED KNOWLEDGE AND EXPERIENCE, and from increased knowledge comes more informed opinions, which leads to responsible choice. See?

Everything you ever wanted to know about foraging is here! The book that you didn’t even realise needed to be written has been written. As I say in … END_OF_DOCUMENT_TOKEN_TO_BE_REPLACED

These words came from the mouth of none other than the President of the HEMP party, Michael Balderstone, in the main street of Nimbin in front of … END_OF_DOCUMENT_TOKEN_TO_BE_REPLACED

Allow me to reintroduce the Multi Criterion Decision Analysis (MCDA) tool championed by Professor David Nutt back in 2011. Before I do though, did you … END_OF_DOCUMENT_TOKEN_TO_BE_REPLACED