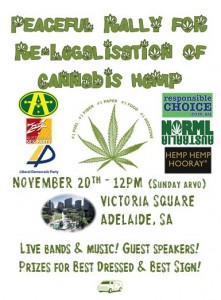 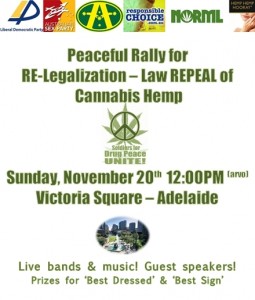 The War on Drugs has failed; the public and governments globally are growing wise to the facts. On the 20th of November South Australian’s will rally in Victoria Square in Adelaide to show support for Cannabis re-legalisation in Australia. The term “Re-Legalisation” being used to point out that cannabis once was used very successfully as a common, legal and valued plant. The group aims to raise awareness of the benefits of cannabis hemp, demanding responsible drug policy while pointing out the destructive consequences of prohibition.

The 1994 Report on the National Task Force on Cannabis (Canberra) “Legislative Options for Cannabis in Australia” states that “Australia experiences more harm from maintaining Cannabis prohibition policy than it experiences from the use of the drug. We conclude that cannabis law reform is required in this country.” While many Australians enjoy a relatively relaxed enforcement, cannabis laws in Australia are still out-dated and conservative when contrasted to the practical success of their objectives. It is estimated that 750,000 Australians use cannabis every week and approximately 300,000 smoke it on a daily basis.

Recently The Global Commission on Drugs made the recommendation that governments globally look for new ways of dealing with the drug issue and in particular that cannabis should be removed from the criminal justice system. The opening paragraph of their report states:

The global war on drugs has failed, with devastating consequences for individuals and society around the world. Fifty years after the initiation of the UN Single Convention on Narcotic Drugs, and forty years after President Nixon launched the US government’s war on drugs, fundamental reforms in national and global drug control policies are urgently needed.

The truth about Cannabis is that it cannot kill you; it is non-addictive, non-toxic, a natural medicine proven to treat a huge number of illnesses including arthritis, Tourette’s, AIDs and cancer patients. It is a vital medicine wrongly being withheld from countless suffering people; a natural medicine with little to no side effects. The low THC variety of hemp, which is impossible to ‘get high’ on , is a profitable industrial crop useful for making just about everything, such as housing, building materials, clothes, paper and fuel. All this while being affordable, carbon positive (better than carbon neutral), fire resistant, animal and environmentally friendly, and a highly nutritious source of food requiring little to no herbicides/pesticides in a complete life cycle – literally every part of the hemp plant can be used and is amazingly nutritious to the soil in which it’s grown.

While alcohol, cigarettes and pharmaceutical medication, which all remain legal and in the liberty of mature adults to responsibly use, yet have been the direct result of millions of deaths worldwide – a completely natural plant which has been utilized in communities around the world for centuries, remains illegal. The basic fact is that cannabis prohibition is a civil rights issue and that while much government and media disinformation abounds, the best evidence indicates that cannabis is safe and good for you. Prohibition squashes the natural rights of all human beings, filling expensive and dangerous prisons while destroying lives by making criminals out of non-violent people, costing taxpayers billions in valuable resources. All the facts conclude that prohibition laws do not work and that the public demand open, honest debate about cannabis and its place, if any, within our country’s legislative framework.

“The illegality of cannabis is outrageous,
an impediment to full utilization of a drug which helps produce
the serenity and insight, sensitivity and fellowship
so desperately needed in this increasingly mad and dangerous world.”
– Carl Sagan 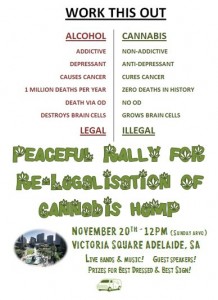 Everything you ever wanted to know about foraging is here! The book that you didn’t even realise needed to be written has been written. As I say in … END_OF_DOCUMENT_TOKEN_TO_BE_REPLACED

Allow me to reintroduce the Multi Criterion Decision Analysis (MCDA) tool championed by Professor David Nutt back in 2011. Before I do though, did you … END_OF_DOCUMENT_TOKEN_TO_BE_REPLACED

Apparently so.It's been a long time and I shouldn't have left you, without a dope beat to step to, and that...Anyway I have been busy in the … END_OF_DOCUMENT_TOKEN_TO_BE_REPLACED

Whenever you want to create an illusion you need a distraction, otherwise your sleight of hand is way too obvious and the prestige of the illusion is … END_OF_DOCUMENT_TOKEN_TO_BE_REPLACED

It's a beautiful place; shame about the incompetence of their state government when it comes to drug policy. Now in a previous article we saw how … END_OF_DOCUMENT_TOKEN_TO_BE_REPLACED

The recent political response to the Australia21 report on illicit drug policy in Australia may have seemed positive, but in many ways the report's … END_OF_DOCUMENT_TOKEN_TO_BE_REPLACED