Well it depends what you mean by them, doesn’t it? 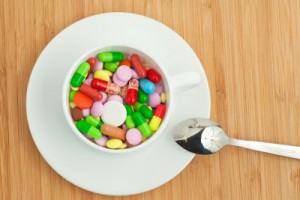 I recently had an interaction that made me reflect on our common perspectives on drug use. A friend of mine, who is well aware that I don’t drink and rarely partake of any drugs other than caffeine, expressed his suprise that I was interested in the legalisation and regulation of cannabis. The conversation went a little like this;

RC – “Check out this link to my blog, I’ve got a new post on cannabis. You should check it”

RC – “…WTF!? You know I don’t even drink mate. Peeps need an education is all. Clue up”

Or something like that anyway…with swearing on my behalf and more goofy pot stereotypes contributed by said friend. It got me thinking.

Why is it that if you support harm minimisation you must be a user of an illicit substance or substances, or a “drug” user. I use the term “drug” in inverted commas in this context because apparently the only drugs that exist are the ones that are illegal. Well I happen to believe that the term “drug” means more than that. In fact I am quite fond of the foreward passage from  After the War on Drugs: Blueprint for Regulation by Transform Drug Policy Foundation 2009:

Heroin, cocaine, ecstasy, cannabis, prescription and over-the-counter medicines, alcohol, tobacco, coffee, tea – we are all people who use drugs. Our refusal to acknowledge this comes from a deep-seated fear that ‘we’ might become, or be seen as, one of ‘them’. What we really need to focus on is the difference between drug use and drug addiction or dependency. Global prohibitionist drug policy continues to focus efforts primarily on the substances alone. This is wrong.

I quoted it in my last post as a bit of an afterthought but it is particularly pertinent to this one. Almost everyone uses at least one drug, pharmaceutical or not, but, for some reason we do not want to admit that we use them. Why?

I think it’s fear personally as the foreword says. The World Health Organisation (WHO) defines a drug as, broadly speaking, any substance that, when absorbed into the body of a living organism, alters normal bodily function. Hence if you take or use any substance that alters your normal body function YOU ARE A DRUG USER.

RC stands and says: “My name is Responsible Choice, I’m a drug user and I’m a caffeine addict”

Seriously, the last time I gave up coffee I had a migraine within a day and it lasted for 5 hours. All I could do was rock and moan. It’s anecdotally a common withdrawal symptom, as in a physical response to the absence of the drug in your system.

IT’S WHAT HAPPENS WHEN YOU’RE AN ADDICT AND YOU STOP USING BECAUSE YOU’RE BODY HAS BECOME DEPENDANT ON THE DRUG AND ITS EFFECTS.

So I’m an addict.

OK…but I REALLY love coffee! It makes me feel great, helps me do my job better, and provides me with the opportunity to increase my social interactions when I use it. Wanna have a cuppa?

Now don’t freak out, I’m going to ‘quote’ Wikipedia. It’s not because I feel they are an unquestionable font of well-researched knowledge, in fact it’s the opposite. I’m hoping that I will be able to gain some sort of impartiality in what I’m about to explain.

As I say, according to Wikipedia, coffee has played a crucial role in many societies, but, suprisingly, it was banned in Ottoman Turkey during the 17th century for political reasons and was associated with rebellious European political activities. Look at it now though, one of the most consumed beverages in the world, and also one the most important crops and commodities in the world.

NOT UNLIKE CANNABIS REALLY.

Again according to Wikipedia:

Cannabis was also known to the ancient Assyrians, who discovered its psychoactive properties through the Aryans. Using it in some religious ceremonies, they called it qunubu (meaning “way to produce smoke”), a probable origin of the modern word “cannabis”. Cannabis was also introduced by the Aryans to the Scythians and Thracians/Dacians, whose shamans (the kapnobatai—”those who walk on smoke/clouds”) burned cannabis flowers to induce a state of trance. Members of the cult of Dionysus, believed to have originated in Thrace (Bulgaria, Greece and Turkey), are also thought to have inhaled cannabis smoke. In 2003, a leather basket filled with cannabis leaf fragments and seeds was found next to a 2,500- to 2,800-year-old mummified shaman in the northwestern Xinjiang Uygur Autonomous Region of China.

And now we find cannabis is the ‘new’ coffee. Banned during the 19th Century for political reasons and associated with rebellious political activities. Two psychactive substances, two very similar stories. Almost identical, except that cannabis can’t kill you from an overdose, COFFEE CAN!

Well… me I guess, but there are a truckload more people who will still say that they are not drug users when they do exactly the same, and probably even more who have no idea that coffee can be lethally overdosed on.

I know I’m a drug user because I drink coffee, and I can admit it is one of my favourite drugs. My wife can’t stand the stuff. Everyone is different. She chooses not to use it, I choose to.

The point is I recognise that I am no different to the poor bastard on the street who has lost everything because he is an alcoholic, or the guy who wheels around the oxygen tank because he has emphysema, or the guy who has no teeth because of his heroin use. I recognise we all use drugs, but some of us can’t simply be helped by a couple of paracetemols and a lie down. Some of us need a lot more help to sort our drug use and drug habits out.

Is maginalising, imprisoning, discriminating against and demonising them supposed to help them?

If not why do we do it, and why do we think that we are not human beings just like them?

Is it because we don’t want to help them? Or is it we are too afraid to care about these reflections of ourselves?

The mirror can be a bitch sometimes can’t it?

Everything you ever wanted to know about foraging is here! The book that you didn’t even realise needed to be written has been written. As I say in … END_OF_DOCUMENT_TOKEN_TO_BE_REPLACED

These words came from the mouth of none other than the President of the HEMP party, Michael Balderstone, in the main street of Nimbin in front of … END_OF_DOCUMENT_TOKEN_TO_BE_REPLACED

Allow me to reintroduce the Multi Criterion Decision Analysis (MCDA) tool championed by Professor David Nutt back in 2011. Before I do though, did you … END_OF_DOCUMENT_TOKEN_TO_BE_REPLACED